I’m in desperate need of some tarot reading practice so – fresh from watching episode 5 of Smash last night – I thought I’d do a reading for Karen Cartwright. For those not in the know, Karen was almost cast as Marilyn for a Broadway show in the making but finally lost the part to Ivy.

Lately, I seem to try too hard and write far too much when I read so this time I wanted to try something shorter, sweeter and more free-flowing.

Karen’s totally fictitious question was:
“I’m in the chorus for an upcoming Broadway show. Everything’s great except the girl playing the lead is being such a bitch to me even when I’m trying to be nice to her. What can I do to make her like me?”

I drew three cards from the Anna K Tarot with no position meanings:

Okay, so the short answer is…

Stop worrying about whether Ivy likes you or not and focus instead on playing your part in making the production a success. You are not equals – Ivy is the star and you are part of the chorus. Your raison d’etre is to support her and make her look good. In doing so, you’ll be contributing to the success of the show, which everyone can benefit from. This in turn may lead to a new beginning or exciting opportunity for you to branch out on your own. In the meantime, look for friendship and camaraderie amongst your peers in the cast and crew. 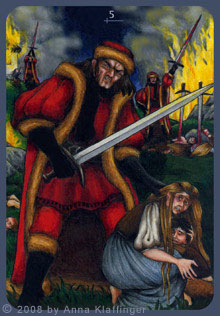 The Anna.K Tarot is a very honest deck. What I mean by that is, it doesn’t have any airs or graces and it doesn’t dress things up.

For example, one of the things I really like about it is the head-on way it depicts negative situations. The 5 of Swords is an excellent example of this with its violent scene of barbarians pillaging and burning and preying on the weak. Some might see it as too extreme for most everyday readings, but I like it because it cuts to the chase. The subject of the reading might not be as dramatic as the scene on the card but it certainly makes you confront the reality of the situation – whether that’s your boss abusing his position to advance his career or your own treatment of the new girl. It says, “Hey, the bottom line is, someone here’s being a real bully”.

And the 5 of Swords isn’t the only card to speak out in the deck. Another favourite of mine is the Devil, which shows a scene of such debauchery and depravity, the real Devil would be proud. 😉 There’s greed, lust, war, gluttony – probably all seven of the deadly sins if I could remember what they were. And everyone in the card has completely lost sight of themselves. Everyone, that is, except for the Devil, who is the only one in control. What an incredibly powerful and unapologetic image. It would certainly make you think twice if it came up in a reading.

Before you start running for the hills, let me say that these cards are in the minority. In fact, the Anna.K Tarot is a very well-balanced deck which covers the full spectrum of real life. So, alongside these cards and others like them – the Tower, and the 3, 4, 8, 10, and Knight of Swords (okay, let’s just say the Swords suit!) – there are wonderful paintings of joyful family celebrations, of warm summer days, and of growing old with the person you love. And then there are the cards in-between, that show the daily struggles, exchanges, hopes and dreams that we all experience. It’s a deck that feels very much like life itself: painful and joyful, beautiful and messy, cruel and yet mind-bogglingly tender.

More on this when it arrives…

You are currently browsing entries tagged with anna k tarot at Archer Tarot.